I love Banksy's Girl with Heart Balloon and wanted to make a necklace of something similar. The spending embargo is still full force so i thought id experiment with some shrinky dinks i had.
I'm rubbish at drawing so I just copied a girl silhouette i found online and drew some balloons free hand (a massive accomplishment for the girl who repeatedly got Fs in art class for years!)
I drew them about 2/2.5 time bigger than i wanted and then punched some holes in them and baked them as per the instructions. And i l-o-v-e how its turned out :)
Then i spotted a huge error, can you see it?... 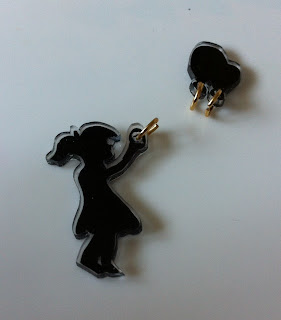