Mr and Mrs/Them or Me game

We played a version of Mr and Mrs at my friends Christmas party last month. Its based on the part of the Mr and Mrs game show where the Mr and the Mrs have to pick one of them as the answer to a question eg who is the best looking? But without looking at the other's answer. If you both choose the same you get a point - simple really! As not everyone at the party was a couple we made the questions more generic and made the paddles Christmassy coloured! (theyre just ping pong bats cover in glittery card!) 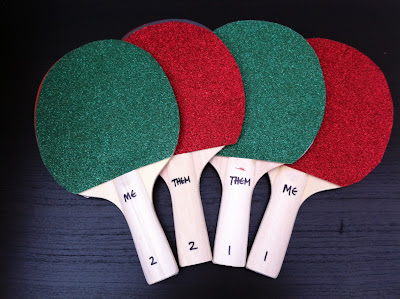 Also as there was alcohol involved i had to label the paddles to avoid any confusion!

These are some of the questions we used

It went down really well and was quite revealing in some instances!!

Email ThisBlogThis!Share to TwitterShare to FacebookShare to Pinterest
Labels: game